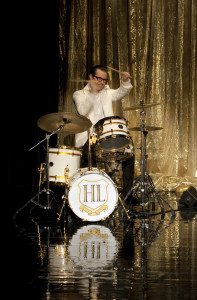 The 33 years old Dutchman Ralph Adriaansen is often on the road. His journeys brings him from theaters to stages. What’s his driving force? His love for music.

Ralph was 8 years old when he first came in contact with the drums, which immediately was love at first sight.
Starting at the local fanfare orchestra Ralph received his first rewards in 2001 for snaredrum and the year after together with the orchestra the dutch championship. He also received the ‘Guido Simons reward’ in 2002.
The performances became more regular from 2004. Ralph started his own percussiontrio ‘Percussion Power’. Attended talentshows among the ‘Rijks Music Awards’, which he won two years in a row. Ralph also went on a week tour with the highschoolmusical ‘Fennie da Costa’.

The talentshows became bigger and more important. In 2006 Ralph attended the national talentshow ‘De Kunstbende’ with the jazz-pop band ‘Latitude’. Came till the finals in ‘Vredenburg’ Utrecht, which brought him to main stages as: ‘Mezz’ Breda, ‘De Verkadefabriek’ Den Bosch and ‘Scheldetheater’ Terneuzen.
During his highschool period Ralph composed an eight minute length music-score for Fanfare as a school assignment. It was without doubt that Ralph would be accepted for the Fontys conservatory in Tilburg (NL) with the main course: improvised percussion. During the study Ralph came in contact with the vibraphone which he embraced with both hands.

Ralph loves to be as all-round as possible. Playing in bigbands, rockbands, popbands and even musicals with the drums and vibraphone.

It was the year 2009 when Ralph really started to perform regularly on the vibraphone. He attended workshops from Nico van der Plas, David Friedman, Frits Landesbergen and Tony Miceli. Went on tour with the National Youth Jazz Orchestra (NJJO) directed by Pieter Guidi, which brought him on the stages of: North Sea Jazz Festival, Bimhuis Amsterdam, Breda Jazz and The Jazzdag. Together with show-orchestra ‘Het Zaans Showorkest’ Ralph performed at Zaantheater in Zaandam (NL) and at the ‘Ebre terra de Vent Festival’ in Spain. Ralph kept playing both the drums and vibraphone. He accompanied Bart van Gorp on the drums during the finals of the Prinses Christina Concours.

2010 was the year of breakthroughs. From this year it went fast and his career as musician boosted.
Because of Ralph’s all round attitude against music styles and instruments it wasn’t long before his talent was noticed by the famous artist and comedian Hans Liberg. Already 6 seasons Ralph is the drummer at the shows of Hans Liberg. Fresh from the conservatory first 3 seasons (2010-2013) in the show ‘Ick Hans Liberg’ followed by two seasons (2013–2015) ‘ATTACCA’. This season Ralph goes on tour with the show ATTACCA in Germany and Austria and the show ‘Jazz and Comedy’ in the Netherlands and Belgium.

Together with the Cor Bakker combo Ralph performed with the vibraphone at the ‘Chassé theater’ Breda (NL) in the sold out main hall. He also performed as solist vibraphone and percussion during the project ‘Impressions of a blue kind’ in honor of the anniversary of 25 years Blue Kind from Miles Davis. It brought him at the Jazz Masters festival in Maastricht (NL) and the festival Transeuropeènes in France.
Ralph was the vibraphone player and percussionist during the CD promo tour of the rockband Wolfendale. Which brought him to Paradiso Amsterdam and the popfestival ‘Paaspop’.

Besides touring with Hans Liberg, Ralph became the main percussionst at the Belgium Balkan Brass Band ‘De Pandoering‘. In 2013 Ralph recorded the vibes on the cd from DJ Subes and went on tour at the North Sea Round Town Festival and Swingin Groningen. In 2014 Ralph performed his first full solo show on the vibraphone during Beukenhof Bruist in Putte.

Ralph is always open for new projects. So besides performing Ralph decided to start a youtube project with the name Vibralph in which he performes Walktroughs and reviews of musicbooks, gives tips and demo’s.

ABOUT ME
The 27 years old Dutchman Ralph Adriaansen is often on the road. His journeys brings him from theaters to stages. What’s his driving force? His love for music. [read more]